On November 13, at the age of 84 the outstanding orientalist, Tibetan scholar and explorer Tsering Dorje passed away.

Tsering Dorje dedicated his life to studying the Himalayan regions of India, and the culture of Tibet in the Buddhist and pre-Buddhist period. He extensively travelled and explored the flora, fauna, ethnography, and geology of the Himalayas. He studied the forgotten language of ancient Tibet: Shangshung. The Tibetan and Buddhist scholars from all over the world visited Tsering Dorje, who has always tried his best to assist them in their studies, and happily shared with them his extensive knowledge, remaining all the while an extremely down-to-earth and modest person. He was a friend and associate of Dalai Lama XIV. In his young years Tsering Dorje personally knew George Roerich and took part in his research work. He studied and actively promoted the heritage of the great Roerich family. In 2009, he founded the Lahaul Roerich Society and has acted as its Vice President. Due to his valuable support Nicholas Roerich's studio in Keylong was reconstructed. Tsering Dorje has always taken active part in the activities of the International Roerich Memorial Trust (IRMT) in Naggar, Himachal Pradesh. 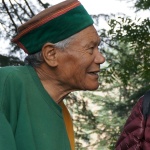